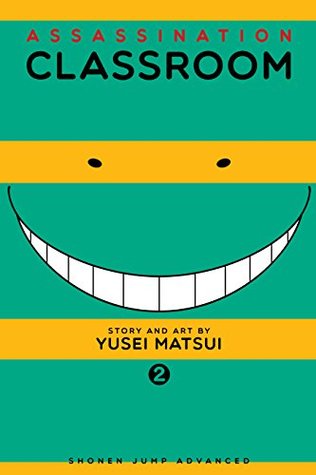 I’m back with another book review and this time I’m reviewing “Assassination Classroom, Volume 2” by Yusei Matsui! Here’s a quick summary so we know what it’s about:

“A sexy new teacher comes to Class 3-E to do the students’ job for them. When the 3-E students begin exhibiting signs of self-esteem, Principal Asano demands that Koro Sensei crush their spirits so they continue to set a bad example for the rest of the school to rise above. Then a class field trip goes terribly wrong when two 3-E girls are abducted. Who will come to their rescue…?”

This book contains some sexual content (though it’s brief and fairly non-graphic), multiple attempted murders, and kidnapping. If you are uncomfortable with this content, you might want to skip this one.

Plot Development: 4 out of 5 stars

I felt that the pacing of this volume was a little slower compared to the last one, mainly because the story often shifted from Koro-sensei’s point of view to the students, and then to the assassins trying to kill him. It was fun reading how the assassins tried to kill Koro so many times and failed, but they also learned more of his weaknesses and other aspects of his personality along the way.

Another part I enjoyed about this story was what lengths various students would go to try to kill Koro-sensei. It makes me wonder how things will go with the two students being kidnapped at the end of this volume and how it will resolve next. I wish I could say more about the plot, but I’d be risking giving major spoilers.

Character Development: 3.5 out of 5 stars

I liked reading the new characters that were introduced in this volume, but I felt that they were a little flat to develop. To be fair, their main focus was on their attempts to kill Koro-sensei, which was probably a major reason I did not enjoy them as much as the other characters introduced from the previous book, but I hope to see more of their personalities in the upcoming volumes.

Overall, I’m rating this manga 4 out of 5 stars!

Though some of the new characters were a little flat in development compared to the previous book, I did enjoy reading more of the students and assassins’ attempts to kill Koro, as well as the latter’s constant survival.