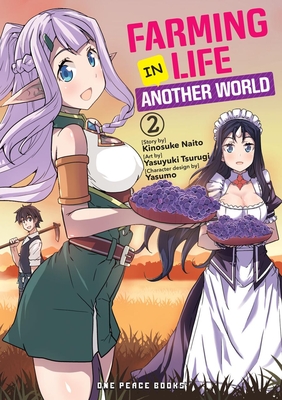 I’m back with another book review, and this time I’m reviewing “Farming Life In Another World, Volume 2” by Kinosuke Naito! I enjoyed reading the first book, so I figured I’d continue with the next one! Here’s a quick summary so we know what it’s about:

“The village is peaceful until a wyvern suddenly bursts onto the scene! Hiraku easily exterminates the fiend with the almighty farming tool, but news of this feat spreads like wildfire and draws many new guests to the village. The number of residents is steadily growing, all while Hiraku’s first child is born! Get your almighty farming tools ready for Volume 2 of Farming Life in Another World!”

I thought that this was a nice second volume in the series. Much like the first volume, it’s loaded with lots of worldbuilding, general advancements for the entire settlement (which is now an official village), and

However, as I mentioned in the first book, I am concerned that the storyline might be going a bit too fast. Not only does our main character end up establishing the place he and the ohters lives in as an official village recognized by other neighboring areas for trade, but he also now has a son (as said son was born). I hope there is a chance for the main story to just settle down a bit in the third volume, so there are more opportunities for us as readers to read more in-depth sections of life in the village, as well as opportunties for Hiraku to bond with his son and have a part in raising him outside of overseeing the village.

Character Development: 3 out of 5 stars

There are many characters introduced in this series, include Hiraku’s son! Somehow, even the child gets lost in the shuffle of new characters being introduced seemingly every two chapters, if not every chapter. I do like that this volume built on the presence of the Demon King, as well as those associated with him. It was fun to see how intimidated the Demon King was by Hiraku, purely because of how fast he grew the village and established trade (as well as taking down a couple wyverns).

However, I hope the series slows down slightly with introducing new characters, just to give some time with showing more relationships in depth between characters. I am curious to learn more about Hiraku and the vampire co-parenting their new child, for example.

Worldbuilding Development: 3.5 out of 5 stars

The worldbuilding, much like the rest of the characters and plot, is also fast-paced. It’s surprising to see how much resources everyone can get in order to sustain themselves and trade with other groups. Considering how many connections everyone has to various places, tribes, villages, etc., it’s not a huge surprise and makes sense. I would be interested in learning more of relationships between various tribes, or the Demon King and his group’s relationship with Hiraku’s village.

If the series slows down the pace of expanding the village in later volumes, I also hope to see more in-depth workings of the village, its residents, and the problems they have to face together (such as the wyverns in this volume).

Overall, I’m rating this book 3 out of 5 stars!

It’s a good follow-up to the first book in the series. However, I hope the next books will take time to slow down slightly on all the plot, character, and worldbuilding advancements to give them more depth.