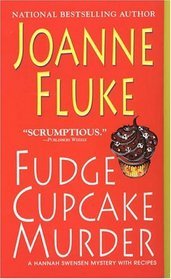 I’m back with another book review, and this time I’m reviewing “Fudge Cupcake Murder” by Joanne Fluke! It’s been a while since I reviewed one of her books, and I have a love-hate history with reading her works, especially since I’ve read and reviewed many books from her Hannah Swensen cozy mystery series at this point.

“For Hannah, life seems to be lacking a certain flavor. It’s not that she doesn’t enjoy teaching a weekly “Potluck Cooking Class” at the community outreach center. Or that she’s not excited about her sister Andrea’s bun in the oven — watching the very pregnant Andrea try to sit on a stool at The Cookie Jar is worth it every time.

Maybe it’s this year’s sheriff’s election that’s got her down. For years, Sheriff Grant’s been the iron hand in town. But now, Hannah’s brother-in-law Bill is giving the old blowhard the fight of his long, dubious career — and Grant’s not taking it in stride, especially once the local polls (and The Cookie Jar gossip) show Bill pulling ahead.

But before anyone can get a taste of victory, things go sour. Just as Hannah’s emptying the trash, she makes a very unappetizing discovery: Sheriff Grant’s body in the dumpster behind the high school where she’s teaching her cooking class. And if that weren’t bad enough, the poor man still has fudge frosting on his shirt from the cupcake she gave him earlier. She’d been trying to find the secret ingredient left out of the recipe. Now she has a more important mystery to crack.

The number one suspect is none other than Bill. In fact, he’s the only suspect. But Hannah’s not swallowing it. Plenty of people had reason to hate Sheriff Grant, starting with all the deputies whose cases he stole during election years just so he could take the glory. Soon, Hannah’s dishing up scandalous secrets, steaming hot betrayals, and enough nastiness to keep the gossip mill at The Cookie Jar going through several pots of decaf. And the closer Hannah gets to the truth, the closer she gets to smoking out a murderer with a very nasty recipe for silencing people. Will Hannah be able to stand the heat when someone wants her out of the kitchen… for good?”

This book contains attempted murder and actual murder. If you are uncomfortable with this content, please don’t read this book.

Character Development: 3 out of 5 stars

I’m not even going to bother giving this book a romance development section in this review. For those who do not know, Hannah is in a constant love triangle with two other characters, Norman and Mike. Over half this book is spent between Hannah and Mike, while Norman is barely mentioned and/or appears until the last third of this book. Either way, nothing has changed in the love triangle—Hannah still can’t choose whether she wants to be with Mike or Norman in the long run. If I were Mike or Norman, I would walk away after being stuck in this love triangle for who-knows-how-many-books long by now. I’m also aware that I’ve also read this series out of order since I’ve read and reviewed books taking place much later in the series, but the love triangle still hasn’t changed much moving forward.

Putting the love triangle aside, I thought it was nice to read Andrea and Hannah’s relationship in this book. Both sisters really were supportive of each other, especially with Hannah being so supportive of Andrea during Andrea’s current pregnancy, and it was refreshing to see some development given to Andrea, especially since she usually does not have as much time in the limelight in most books. However, many of the other characters were fairly flat or felt underdeveloped, especially the killer and their motivations.

I felt that the murder mystery itself was fine, but the pacing of the plot dragged on too long. I also felt that the case was barely touched upon in the second third of the book, only for all the pieces to somehow fall into place during the last third of the book. It also did not help that Hannah barely had any action when confronting the true killer, unlike most books where she usually has to defend herself or figure out a way to stop the killer from killing her or her loved ones in the process.

Overall, I’m rating this book 3 out of 5 stars!

It’s not one of Fluke’s strongest books in this series, but it is a good quick read for anyone who wants a murder mystery easy to follow. However, if you dislike love triangle subplots that don’t lead anywhere, I would avoid reading this one.