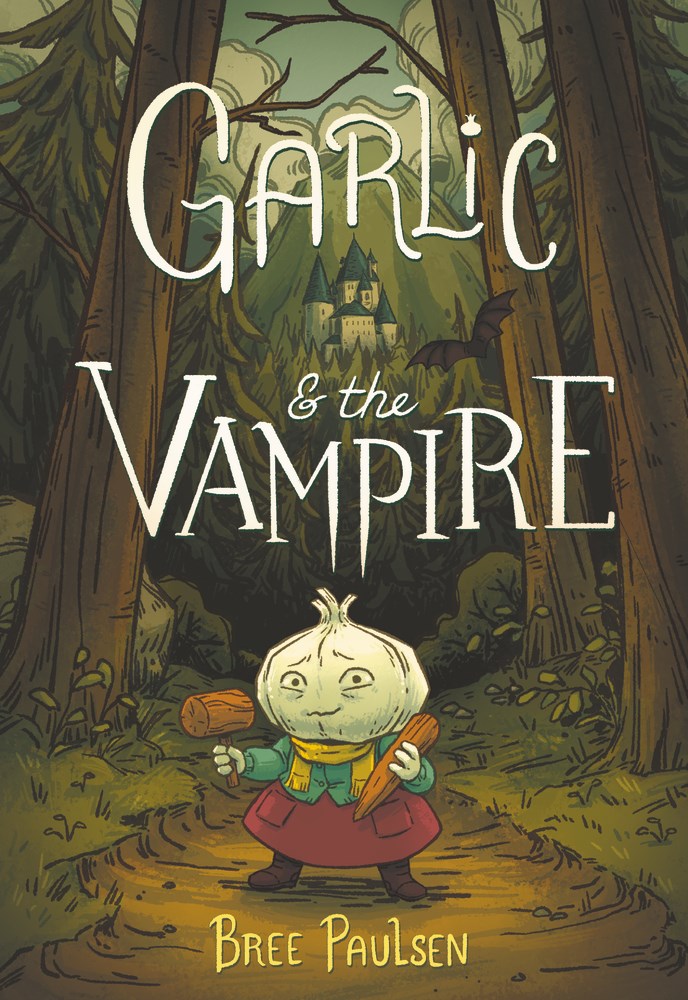 I hope that your April was full of good reads, and that this one will be filled with good pieces to read as well. I’m back with another book review, and this time I’m reviewing the graphic novel “Garlic And The Vampire” by Bree Paulsen!

Here’s a quick summary so we know what it’s about:

“Garlic feels as though she’s always doing something wrong. At least with her friend Carrot by her side and the kindly Witch Agnes encouraging her, Garlic is happy to just tend her garden, where it’s nice and safe.

But when her village of vegetable folk learns that a bloodthirsty vampire has moved into the nearby castle, they all agree that, in spite of her fear and self-doubt, Garlic is the obvious choice to confront him. And with everyone counting on her, Garlic reluctantly agrees to face the mysterious vampire, hoping she has what it takes.

After all, garlic drives away vampires…right?”

Worldbuilding And Plot Development: 4 out of 5 stars

Usually, I put worldbuilding and plot development into two different categories, but since the worldbuilding was so simple but also lent so well to the plot, I felt that they deserved a shared section this time around. It was fun to see walking, talking, vegetables involved in this story. The fact that a well-known saying of garlic being able to stop vampires spurred the heroine, Garlic, to go on her adventure was pretty fun to see as well. The artwork itself is also very engaging and fun to see.

The main story itself was simple at its core, but it was made so engaging through the characters, their interactions with each other, and the overall artwork depicting all of them.

I loved reading Garlic and the rest of the cast, but especially Garlic since she had the most growth. I could relate to her wanting to prove herself, with how anxious she got around others and tried her best to face her fears. I also enjoyed watching the witch and Carrot being supportive people towards Garlic and helping her work through her anxiety as well.

I also enjoyed reading Celery. Even though he’s shown to be a more antagonistic/doubtful character, I like that the graphic novel didn’t use those traits as ways to villainize him and instead used it to humanize him, for a lack of better words. I also enjoyed reading the vampire that showed up later in the story, as well as learning more about him and his true nature.

This is a fun, short read. It’s not an overly complex story and I don’t think it was intended to be such. However, it’s still worth picking up to read despite the short length. It’s a cute story and also one you can share with kids,