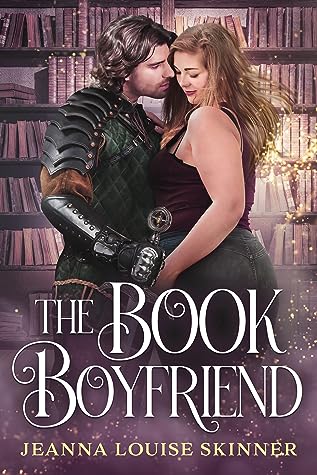 I’m back with another book review, and this time I’m reviewing “The Book Boyfriend” by Jeanna Louise Skinner! It’s been a little while since I read and reviewed a romance novel, so I thought that this would be a good opportunity to do so. Here’s a quick summary so we know what it’s about:

“Emmeline always dreamed of being an author, finding comfort in words and between the pages of her beloved romance novels, but a mental health diagnosis leaves her blocked and unable to write. Then she inherits a crumbling, second-hand bookshop from a mysterious old friend and Emmy discovers that magic is real and maybe her fantasies about the heroes in her favourite historical romances aren’t so far-fetched after all.

A handsome stranger–wielding a sword as dangerous as his Tudor past–appears in Emmy’s bookshop asking for help. Together they must race against time itself to lift the curse imprisoning him in an ancient book. But when growing threats to her safety are proved real and not another symptom of her illness, Emmy must learn to trust her own voice again. Can she find the words to save Jonathan and her shop before tragedy strikes on the fateful final page?”

The worldbuilding made sense overall. I still have questions about how the witches operate (and why some bother being evil in the first place) that are likely answered in future books. However, I think the information provided in this book made sense, though, much like how Emmy had a hard time believing it, I also had a hard time making sense of it until about halfway through the book.

However, I did enjoy seeing how Jonathan’s past influences made him so oblivious to how modern technology worked. That led to some fun scenes and some opportunities for him and Emmeline to bond.

My main issue with the book is the main story, actually. I felt that it dragged on too long, pacing-wise, and it could have been shortened by a few chapters. The story as is is good. But, it rushed to get to the ending since it dragged on quite a bit in the middle.

I also disliked the plot twist revealing Lizzie as the villain. I thought it was way too fast and could use much more foreshadowing than it got.

Character Development: 3.5 out of 5 stars

Emmeline and Jonathan were both fun to read. Each of them stand out as their own individual characters. I also enjoyed reading their romantic relationship development, which I’ll discuss more in the next section.

I didn’t like reading Lizzie’s development as much. She was more enjoyable being a more supportive friend versus her becoming the twist villain of the novel (and, presumably, the series that this book is part of). There could be more foreshadowing of Lizzie becoming the villain of the novel. I preferred her as the good friend she was for the first half of the book. The book was also a little rushed at the end. For instance, the plotline involving the stalking and creepy messages was handwaved by one line of dialogue in the last chapter to explain them being done on Lizzie’s behalf.

Romance Development: 3.5 out of 5 stars

Since romance is one of the main elements of this book, I felt that the romance should have its own section. I enjoyed reading Emmeline and Jonathan’s romance with each other. I thought it was really sweet how they had a bit of a slow-burn development throughout the main story. They still have a little while to go before I fully root for them as a pair. This is mainly because both have their past main plot-related issues to deal with for example. But, they’re a step in the right direction and it’s a healthy romance overall.

There is a clear lack of time developing and foreshadowing Lizzie’s development, and the plot drags on a bit too long. However, this was a good romance book overall.