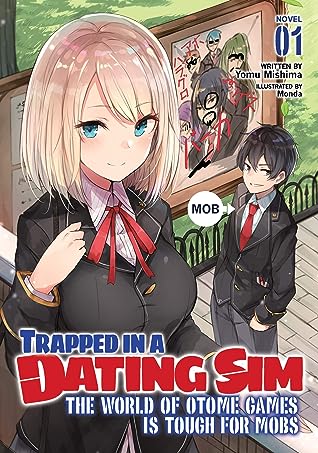 I’m back with another book review, and this time I’m reviewing the light novel “Trapped in a Dating Sim: The World of Otome Games is Tough for Mobs, Vol. 1” by Yomu Mishima! Here’s a quick summary so we know what it’s about:

“Office worker Leon is reincarnated into a dating sim video game, where women reign supreme and only beautiful men have a seat at the table. But Leon has a secret weapon: he remembers everything from his past life, which includes a complete playthrough of the very game in which he is now trapped. Can Leon spark a revolution to change this new world order?”

I really enjoyed the worldbuilding of this novel. This takes place in a strictly matriarchal setting, where men are the bottom rung of society. Any man that isn’t married by age 20 is considered “damaged goods” and will be forced to get married to older women, widows, etc. I thought the author used this worldbuilding as a great way to poke fun at strict gender roles. It forced the protagonist, Leon, into empathizing with ladies stuck in traditionally patriarchal settings. It also showed off how having one gender ruling over the other isn’t all that cracked up to be. Even the ladies also suffer from some consequences of a mainly matriarchal world, especially considering the marriage-related rules in this society. This aspect, however, is more obvious in the second half than the first.

However, the one thing I didn’t really understand was having the mecha robot fights. They were fun to read, but the rest of the setting (even though they do use technology) didn’t quite match up with justifying having giant robots.

I really enjoyed reading Leon, the protagonist. The worldbuilding turned into an opportunity for Leon to fight against his circumstances and try to build a life for himself. Unlike the other characters, Leon is considered one of the NPCs, a background character – which gives him virtually no advantages when he started out. Every time he progressed towards his goals, I felt like he actually earned them. He did genuinely put in lots of work and learning into surviving in this world. He does have his flaws—sometimes he can be overconfident about his abilities, or a bit petty. Considering his circumstances and the situations he falls into, however, it made me enjoy reading him more.

I was a little disappointed that all the “main love interests” of the book’s otome game world were all terrible people. I felt that there could’ve been a wider variety of personalities among these five. However, I was happy to read that they all got disinherited by the end of this volume—though I doubt this will be the last that I read of their existence.

Marie becomes the main villain of the series (or so it seems based on this book). I’m interested to read more about her and her goals. It’s clear that she wants to secure her happiness. It also seems that Leon might not be the only person who was reincarnated as a character in the world of the game. I hope to learn more about her in later volumes.

I enjoyed the main story overall. I can’t talk too much about it or else I’ll spoil too much, but it was overall entertaining. I think the main story’s pacing slowed slightly with the second half, but that’s mainly because of the robot fights involved. It also should be noted that the protagonist’s point of view is in the first person, while the other characters’ points of view are in the third person. I thought it was a good way to differentiate the main character from the others.

I would recommend this book to those that enjoy poking fun at dating sims and otome games, and fun worldbuilding. I look forward to picking up the next volume in this series when I can!